A yogi’s look at the role of catharsis in everyday life.

“I wouldn’t call it cathartic,” she said.

That’s how a fellow yogi described a personal transformation program that our studio was about to offer. Our teacher was encouraging us to participate and asked how we might describe the experience.

He looked at me. “You’re the writer.”

The class always engages in lighthearted conversation just before practice, but today, I felt stumped — not that there’s any right or wrong answer to describe a yogic experience, but if yoga isn’t cathartic, then what?

That day, from child’s pose to corpse pose, I couldn’t stop thinking about that darn word — catharsis — and was thankful for the yogi’s reply, which begged an important question: what the heck does it really mean? Yoga feels extremely cathartic to me, but not everyone experiences the same sense of release from the same hot, sweaty practice in the same way.

It’s interesting, and beautiful, to witness how we perceive source moving through each and everyone one of us, how we attach emotions to the energy that animates our bodies, the quickening of life that does not concern itself with our individual quirks and limited senses.

My catharsis aint your catharsis, but even so, when we’re stuck in the past, or anxious about the future, we live in a state of perpetual longing for catharsis.

We rolled over after corpse pose into a fetal position, which our teacher referred to as “embryonic” pose.

Every moment after the birth scream is a desire for release from pain, but pain is information. All we ever long for is to let go of it without stopping to ask what it’s trying to tell us. Pain is part of me. How can I embrace pain? Are we all just crawling up a hill?

The word ‘catharsis’ comes from Greek katharsis (kathairein ‘cleanse,’ plus katharos ‘pure’) and typically refers to a process of release from strong, repressed emotions, which leads to relief. In medicine, it refers to purgation.

Aristotle describes it as the purging of the emotions of pity and fear aroused by tragedy. More broadly, catharsis also refers the climax of a story that begins with a need for resolution. (The happy ending. The good cry at the end of the movie.)

Freud’s Beyond the Pleasure Principle comes to mind. Life is a tug of war between eros and thanatos — the sex and death drives battling it out when ultimately “the aim of all life is death,” or what Eastern thought would call the blissful dissolution of the ego — full release from the bondage of karma.

In Judaeo-Christian traditions, catharsis comes in the form of the exiled scapegoat, the sacrificial lamb, the blood of Christ’s covenant — all hold symbolic power to cure collective ills or redeem the individual soul. For the eternally damned, purgatory is just one step away from full salvation in an elusive heaven — unless we “see through the glass darkly” (St. Augustine) or “open the doors of perception” (Aldous Huxley).

Catharsis is everything. It’s human nature, the narrative of our lives. Nobody wants to go to bed after having a hellish day stuck in the holding pattern of the last waking hours. Catharsis is always, a priori, the result of living in a state of perpetual expectation, the longing for a release from pain — a deep sleep of the soul.

I think I understand why my fellow yogi didn’t describe a yoga-based personal transformation program as “cathartic.” Perhaps because we associate the word with epic, sweeping and overwhelming release— a moment of surrender that leaves us forever changed. And that makes sense: the deeper we go into darkness, the brighter the light will seem when we open our eyes.

To be sure, catharsis can come suddenly, radically. “I can’t come back from that.” Boom. Slam. Done.

But what of “little catharses” — the steps we can take each day do something about the fact that pain is information? Why place the bulk of our pain in one final, earth-shattering surrender?

In yoga, we practice yama and niyama (put simply, an ethical life with particular restraints). Mindful discipline, instead of wild abandon that only seems like a natural state of freedom, is what brings the mind, body and soul a connection to wholeness.

You don’t have to practice yoga, however, to know catharsis at its most basic physiological level.

Catharsis happens to our bodies everyday. We eat and drink. We poop and pee. The body is wonderfully engineered to take in nutrition and release what it doesn’t need. Plain and simple. If we eat junk (lower vibration tamasic or rajasic food, as it’s called in Ayurvedic philosophy), the body then works that much harder to find balance. If we eat wholesome, higher vibration (sattvic) food, we support the body with the best possible nutrition.

Orgasm is another form of release. In a Western pornographic mindset, the narrative of sex is short — wham bam thank you mam — with a singular aim of releasing sperm. But in Tantric practices the birthright of orgasm is mindfully and deliciously delayed. The afterglow isn’t put off when we forget ourselves in the moment, in a fleeting state of bliss.

When we hoard unnecessary thoughts as well as material things in our surroundings, when we accumulate instead of eliminate, piling it all on — it makes it that much harder to find catharsis. The mind has much catching up to do with the body when it suffers from this disease of more, which forces us to purge toxic, negative thoughts that strangle the flow of energy. What’s stored in the cupboard of our minds?

Grip too hard on that tightrope of anxiety for too long, and we become the thing we most fear — fear itself — because we can’t even find ourselves in our tangled thoughts. Every time we pick up that prescription to ease our dis-ease, the promise of wholeness in a pill, we unconsciously think: “When will it go away?”

It — that thing — that sadness, fear, isolation — that defines the space of spiritual pain.

Imagine climbing over a pile of thoughts you don’t need. By the time you get to the top, you’re exhausted, and instead of feeling overjoyed at the finish line, the ending is anticlimactic — the opposite of catharsis. We do, truly, so often get in the way of our own liberation from pain by holding on to the things that cause pain in the first place.

How do we voluntarily find catharsis in our ordinary, daily lives? Day to day, then, little catharses can come to play by letting go of countless expectations, the “what ifs” that plague an anxious mind, by listening to pain rather than avoiding in the self-sabotaging behaviors. The aim of catharsis, ultimately, is to not have to experience it at all, and to be fully present in the moment.

Here I am now. Can I hold this space? Can I understand what it’s trying to tell me, so I can let go?

Rolling over in embryonic pose that day in yoga class, I realized that catharsis is not only a release from pain, but a full understanding of it in order to come to wholeness. Catharsis is coming home — to yourself.

Think outside the yoga mat 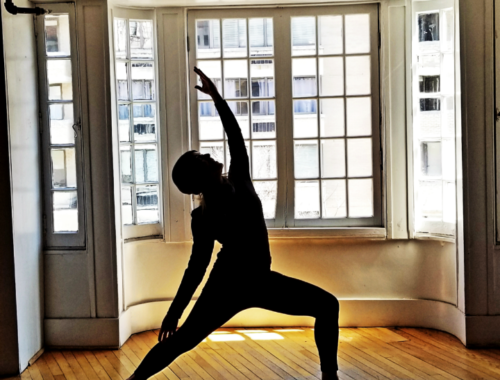 Think outside the yoga mat